Oh, the Simpsons... Who doesn't remember this show? How can you not love it? It's one of the most revolutionary animated shows of all time. It breaked some of the strongest links of what comedy was. It is still one of the greatest telivision shows of all time.
But why doesn't it get a 10/10? The entire show is now at its 24th season, and still doesn't know when to call it quits. I'm serious! It has had a lot of great moments back when it was younger and had some hilariously fresh ideas. But now... you just want it to get cardiac arrest so we can finally say "Hey, you know what? It had a good run. And we should always look back at it for generations to come." Until we're allowed to say that, we're stuck with a near piss-poor written version of a show that is now completely hit-and-miss(with an unfortunately larger emphasis on the miss).

P.S: of course, I still love this show, it's just that it's at the time where it should kick the bucket. Think about it: Almost any animated Series (with one exception being South Park) should end before it reaches 300 episodes, The Simpsons is at 500. It's getting stale.

How did this get greenlit?


There are reasons people say this show was horrible. One thing I can tell you is that, they are all true. I hated every single character, whom of which showed no likable qualities whatsoever. I did not laugh once.(This was supposed to be a comedy, God forbid!) There was no reason to watch this show except for witnessing its abrupt end. Thank God, it only had 7 episodes!

This is late, but can still be relevant.


Batman. You know the name as a cult icon of comic book history. But how does his latest game (that isn't Lego) hold up?


STORY
Depending on whether or not you get the Catwoman DLC, you can play the game in 2 different points of view (Catwoman and Batman), but still get the same normal story, however, the story is anything but normal. You play as of course Batman, in the former North Gotham City, now known as Arkham City, a place where the former inmates of the asylum from the previous game are now transferred here. However, there are more inmates here than there were in the previous game which supposedly took place six months before this game takes place.

To start with the shocking twists, the one who is in charge of this place surprisingly knows your secret identity. You learn this at the beginning during a gripping title sequence (that of which is perfect in every aspect). You reach many different plot points and subplots that get more suspenseful throughout the game which I am not going to spoil for you. You have the option of skipping cutscenes, but, why would you want to? It's already a good game when you have a fantastic story and cutscenes that are just beautiful to look at. And even when the main story is finished, there is still so much more to do.


DESIGN
Developers did their best to make it feel like you had a huge environment to move around in. They did a damn good job of it. Everything is improved with this sequel. The AI is much more sophisticated and lifelike than it was in Arkham Asylum. So much so that you would need the try harder to take some enemies down. Multiple enemies are now able to attack you at once. It can very chaotic, mainly in the challenging New Game Plus mode, but that should be the point, it shouldn't feel too easy. Challenge is a good thing. It isn't hard because of bad controls or the game is broken, it's because the game developers give you bigger variety of options in combat, and enemies that have actual brains as opposed to a repetitively predictable pattern for the AI in Arkham Asylum. Speaking of the enemies, they actually look like individuals and not a bunch of clones like in Arkham Asylum. On the side note: I don't hate Arkham Asylum; it's still a solid game. It's just that its sequel is significantly better.

The environments can only be described in one word: Beautiful. The game has a very open environment with high attention to detail. And a large open area is just what a true Batman game deserves. Very few glitches occurred while I played the game and they usually consist of limbs of KO'ed inmates phasing through the walls and floors which can be distracting sometimes but it only becomes a minor issue.


GAMEPLAY
What should be the definitive part of any game, is for this one. You don't just play as Batman. You ARE Batman. This means that you can do almost anything Batman can do, which allows the game to be a truly immersive experience. The controls are very easy to pick up on and like any game, if you have any trouble with inverted controls, you can always switch them on or off. Speaking of which, as a PS3 exclusive, you can choose whether or not you want to glide with motion controls.

Gadgets have a large variety (which excludes the Ultra-batclaw, and multi-batarangs from the first game) with the ability to acquire new gadgets. You can also use some of these gadgets in free-flow combat, but in a swift and non-time-consuming fashion. For example, you can use the batclaw to quickly pull someone toward you right before you dash toward that same guy just to knock him to the ground.

Predator mode has also been improved, allowing for more ways to take someone down. You can grab a guy from the other side of a window. You can jam someone's gun so that when he spots you, he is helpless against you. Fear is your greatest ally. There are so many more moves in your arsenal to utilize to get the job done effectively. You can use smoke bombs to escape waves of gunfire to buy more time to plan your attack. If there is lone pair of armed inmates standing next to each other, you can just take them down in hand to hand combat, or knock them both out simultaneously in stealth. This move in particular reminds me of Batman Returns for SNES. 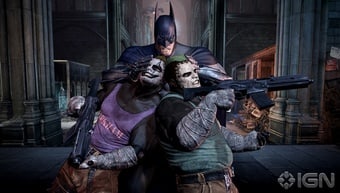 I was also surprised about how different and varied the boss battles were. Each battle does its signature villain justice, as it should. Of course, encounters with villains don't always have battles, a couple of them, (like the Riddler's big ass side mission) require more strategy to defeat. Side Missions, Riddler trophies, riddles, and challenges will also keep you occupied. So much so, that you might feel the need to complete them throughout the story, which the game thinks is just fine.


SOUND
Sound is usually another important thing in games today. It should usually be counted as one of those qualities in a game that immerses you. And the people who made this game should be praised for the fantastic achievement of making such a memorable and most importantly relevant soundtrack. It is able to be timed successfully with the grippingly well-voiced (though somewhat cliché) dialogue and realistically immersive sound effects. You will realize this from the very beginning, right at the moment you push Start. And who doesn't want to hear epic music while they pick off helpless inmates one-by-one?


OVERALL
Arkham City is game that will keep you in from beginning to end and beyond. The story isn't really over at the end of the credits, because there is tons more to do, like completing Riddler challenges, side missions, a new and more challenging difficulty for the game (which feels more satisfying when you beat it), and even a variety of Easter Eggs to discover that could foreshadow what could be the next game in the series. If you haven't played it yet, I suggest you do so as soon as possible, because it is an absolute masterpiece!